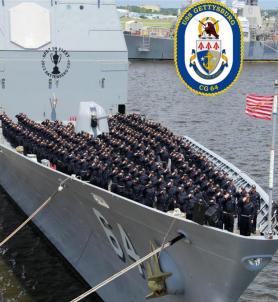 The USS GETTYSBURG (CG-64) is a Ticonderoga-Class Guided-Missile Cruiser and was named for the famous battle fought in Gettysburg, Pennsylvania on July 1st, 2nd and 3rd, 1863 - the battle that turned the tide of America's civil war.

The ship was launched in Bath, Maine in July 1989 and was christened by Julie Nixon Eisenhower (daughter of President Nixon and wife of David Eisenhower, grandson of President Eisenhower). In June 1991, the GETTSYBURG was commissioned in Philadelphia with many folks from the Gettysburg Community attending.

The USS GETTYSBURG CG 64 is a guided missile cruiser and one of the most technologically sophisticated warships in the world. At full manning, the crew consists of 33 Officers, 27 Chief Petty Officers and approximately 300 enlisted men and women.

In 2009, the GETTYSBURG ("Our Ship") deployed with the USS EISENHOWER (CVN 69) (aircraft carrier) strike group. Local citizens were thrilled to have these two ships "joined" since they are both so closely associated with the Gettysburg community.

In 2015, GETTTYSBURG, along with the USS COWPENS (CG 63), was the first to enter a Cruiser Modernization Program, which would place the ships in a four-year period of Operational Inactivity during which time the combat systems, weapons, and navigational suites would be upgraded to extend the service life of the ship. During this time, the crew size dropped to a small "Caretaker Crew" of 2 Officer, 8 Chiefs, and 20 enlisted men and women. Under the command of Commander Steven Puskas, the ship shifted homeports from Mayport, Fl. to Norfolk, Va., where she prepared for extensive upgrades.

GETTYSBURG is currently in the process of remanning and re-outfitting the ship with the necessary accoutrements. Under the command of Captain Corey Keniston, she is scheduled to return to the fleet by summer of 2019, at which time she will be available for operational tasking.

For more information of USS GETTYSBURG (CG 64), please visit and "like" their official facebook page! (See the link below). 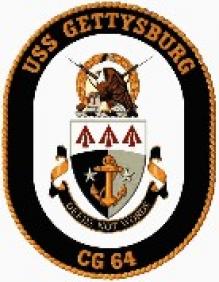 Dark blue and gold are the traditional Navy colors. The shield, divided dark blue and gray, refers to the colors of the Union and Confederate Armies and a country split by war. While expresses peace and optimism and red is a reminder of the immeasurable valor and blood shed at the epic battle of Gettysburg.

At the dedication of the National Cemetery on the Gettysburg battle ground, President Lincoln delivered his immortal Gettysburg Address. The scroll with a drop of blood honors those famous words, especially "...that these dead shall not have died in vain."

Our National bird, the bald eagle, appropriately represents President Lincoln and the Union he strove to preserve. The eagle also represents the Union's victory at Gettysburg, the turning point in the Civil War, which ultimately forged a stronger nation.

The inverted wreath honors all who died, Union and Confederate alike. Muskets we in general use during the Civil War and highlight the hand to than combat as both sides exploded in a tremendous clash of musketry.

"Deeds Not Words" reflect the willingness of those who fought at Gettysburg and those who served on the ship to translate strength of conviction into decisive action.

The USS GETTYSBURG SOCIETY was formed in 1990 with a mission of maintaining the relationship between the greater Gettysburg Community and the officers and crew of "Our Ship". The Society maintains headquarters in the Borough Building at 59 East High Street. A room is dedicated to the Ship and houses photographs, memorabilia and even the Christening Bottle used by Julie Nixon Eisenhower. The Halway leading to the William E. Troxell Council Chambers has been named the USS Gettysburg Gallery, where various pictures and ship artifacts are on display. The SOCIETY sponsors crew visits, color guard participation in holiday parades, "cards to sailors" by local school children and holiday gifts to the men a

nd women who serve on the Ship and protect our freedoms.

The USS GETTYSBURG SOCIETY is funded by annual memberships and voluntary donations (all tax deductable).